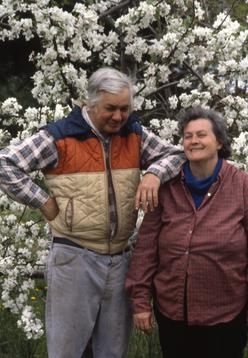 Ditzler Orchard is committed to enhancing bio-diversity in our region as well as public awareness of the benefit of regional food production creating a family friendly farm experience for residents of Parke and surrounding counties.  We endeavor to produce the best quality fruit in carefully managed fields by use of best practice in pest control and old fashioned hard work. Guests can choose pick-your-own options throughout our harvest seasons or buy from our local farm market.

Ditzler Orchard is family owned and operated. Established by Gale and Patricia Ditzler in 1972, the orchard offered a local market for fresh fruit in the mid 1970’s when small orchards were common in the area.  Planting just 100 trees initially, Gale hoped to supplement his income while raising his children with exposure to both the art of producing food and the responsibilities of running a business.

What began as a hobby farm became a regional business, expanding to over 2000 trees by 1990.  Operations had expanded to include a cider press and wholesale to other local markets.  By the mid 80’s the Ditzler children had all moved on to careers in other areas, returning often to assist in the operation.  In 2001, the youngest son, John, moved home to operate the orchard for his aging parents, and brother Mauri established CHERRYWOOD FARM nearby to partner with the orchard and expand the business with a pick-your-own berry operation and pumpkin farm; two things both brothers had experienced and enjoyed.

In 2012, CHERRYWOOD FARM LLC, under the ownership of Judith and Mauri Ditzler, assumed management of orchard operation and expanded the pick-your-own experience to include apples, cherries and peaches. DITZLER ORCHARD remains a regional source for quality fruit and berries as well as a source for fresh unpasteurized apple cider and other local produce.